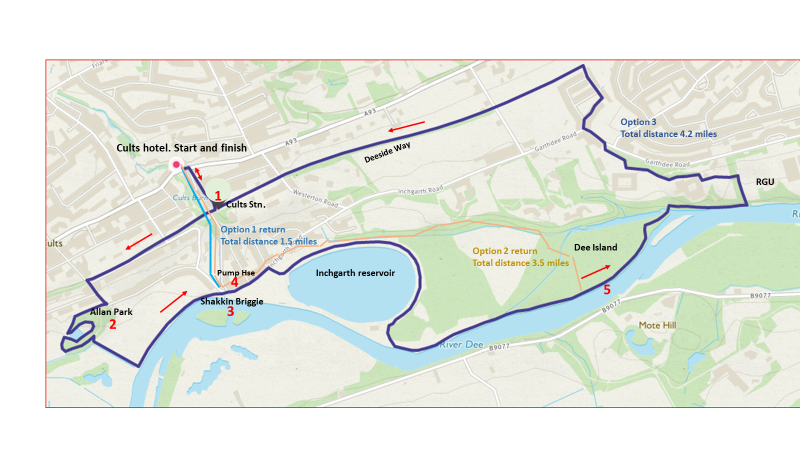 This walk was originally planned by the Cults, Bieldside Community Council for the 29th March as part of Climate Change Week 2020. Following cancellation, it was thought residents might wish to do the walk as individuals. The walk was to include short talks (5 minutes) on local nature and how climate change is, and will, impact on these and the River Dee. Also, brief talks of some local heritage passed along the route. The nature and environmental impact talks were to be given by local naturalists Alistair Watson and Lina-Elvira Bäck (Kaimhill Ecology), and the heritage talks by members of the CBMCC Heritage Group. Synopsis of the heritage talks is given below and a separate sheet gives the nature and climate change aspects.

Some parts of the paths are wet and rough in places, with tree roots etc.  Sections of the river bank have been eroded so extra care is essential. Not suitable for young children or buggies. Wear appropriate clothing and footwear – walking boots advised

From Cults Hotel, cross the North Deeside Road and head down to Cults Station via Station Road.

1. Cults Station. The wooden station opened in 1855 and originally only had a single platform on the later eastbound side of the then single-track line with one siding to the south running to the west. By 1884 the line had been doubled and a goods yard built on the eastern side with two sidings, approached from the east. A pedestrian footbridge was present, a small signal box on the eastern end of the eastbound platform and a small shelter on the westbound platform. Crossover points lay to the east end of the platforms. Suburban services, "subbies" (or commuter stopping trains) began between Aberdeen and Culter in 1894, calling at all eight intermediate stations in a seven-mile stretch of line in around 20 minutes with a total of around 30 trains every day. The "subbies" service was withdrawn from 5 April 1937. By 1951 the line had been singled with the westbound track lifted and the signal box removed. The line was chosen to trial of a battery multiple unit (christened 'The Sputnik') in 1958 it but was not a success and it was withdrawn in 1962. The line was closed to passengers in 1966. The line form part of the Deeside Way long distance footpath.

Turn west along the Deeside Way and then go down Park Brae to Allan Park.

2. Allan Park. The park was named after David Allan, a resident of Cults and head of the firm of James Allan and Son, Furnishers. He gifted about 7 acres of land to celebrate Queen Victoria’s Diamond Jubilee in 1897 and the Park was officially opened in June 1897. It was proposed that there should be a curling and skating pond in the centre surrounded with trees and laid out with walks.

From the lower part climb to the higher part of the park on the south side and take the path to the river. At the river turn left and head east till you come to Dr. Morrison’s bridge, commonly referred to as the Shakkin’ Briggie.

3. Shakkin’ Briggie. The bridge, opened in 1837, was funded by the Rev. Dr. George Morison, minister at the Banchory-Devenick Church, to enable his parishioners on the north bank more easily to attend the church on the south bank. Designed by the renowned Aberdeen architect John Smith it is amongst the earliest surviving examples of suspension bridges in Scotland, with mirrored tall, rounded and tapered ashlar pylons to the north and south each supporting two columns with lintels holding the suspension cables. The classical design with the cast iron Doric columns on the pylons is unusual and characteristic of Smith’s confident use of the neo-classical style in his work. The columns are distinctive and the bridge is one of only a handful of suspension bridges in Scotland with classical styling. The contractors were John Duffus & Co, Aberdeen for the ironwork, and George Donaldson and George Barclay for the masonry and timber work. Over the years the bridge has been damaged by floodwaters and from 1955 onwards the river shifted its course and the southern approach span was swept away. In 1984 the decking was removed as a safety precaution and the bridge is now derelict. The Community Council have initiated a project in liaison with Scottish Water who own the land, to clear the area around the north end and install an information board and viewing bench.

Opposite the bridge is Fairview.

4. Fairview/Pump House. Fairview is a private house and Grade C listed, but was formerly a pumping station of Aberdeen Waterworks. Built in 1864 it was designed by the architect William Smith whose most famous building is Balmoral Castle. As the population of Aberdeen grew so did the demand for water. In 1864 work began on a new water intake from the river Dee at Cairnton near Banchory. Water passed through a tunnel 1.3miles long to a new treatment plant at Invercannie where it was stored for one and a half days and then passed through sand filters before flowing under gravity through a brick aqueduct for 19 miles to the reservoir at Mannofield. However, to supply water to the highest parts of the city the water needed to be pumped and this was done by hydraulic pumps at Fairview. In 1866 the pump house was extended to provide residential accommodation possibly for the pump foreman.With the introduction of toilets and baths the demand for water increased dramatically and so between 1920 and 1926 the facilities at Cairnton and Invercannie were enlarged. This included a new steel aqueduct, a bigger reservoir at Mannofield and a new high-level reservoir at Slopefield to which water was pumped by steam engines at a new bigger pump house in Cults (next to Cults Hotel). This meant that the pump at Fairview was now redundant and it subsequently became home to the manager of the new Cults pumping station with the foreman living in the adjoining cottage.

Both the old brick aqueduct and the newer steel one are still in use. The manual valve seen in the garden of Fairview was used to control the flow in both aqueducts but this is now done automatically from Mannofield reservoir.

Those who wish to return to Cults Hotel at this stage should walk up the Den of Cults, opposite the bridge, which goes under the Deeside Way and direct to the hotel. Those continuing carry along Inchgarth road and turn in at the entrance to Inchgarth reservoir and follow the road round the reservoir till just before the gates. A rough path to the left takes you down to the river. Head downstream with great care as the river has eroded away the path in several places.  On the other side of the river is a mainly shingle island. Approximately the end of the island the path divides. For those who want to take option 2 turn left in-land. There is a waymarker on a birch tree. Once you reach the base of the steep wooded bank turn left along a pleasant wood lined track and another signpost will indicate when to re-join the tarmac road around the reservoir. From here return to Shakkin Briggie and up Den of Cults to Cults hotel.

For those carrying on along the river path you will soon reach the abutment of a demolished bridge.

5. Bridge and Dee Island. A bridge is shown on a 1915 military map and on the 1925 edition of the 6-inch Ordnance Survey (OS) map but not on previous or later editions. This piece of land was previously an island, shown as such on a OS 1865 map and used in WW1 by the military as a training ground in trench warfare. The ‘island’ was originally part of the Banchory-Devenick estate on the south side of the river.

At the end of the ‘old island’ the path turns towards the wooded steep bank (you might be lucky and catch a glimpse of a kingfisher here) and it becomes easier as you approach the campus with sections of boardwalk and wooden steps. Ignore the first step of steps up the bank where the path turns right along the river bank. A flight of steps leads up from the river to access the university grounds where surfaced paths and roads lead to Garthdee Road. Turn west and when you reach a sharp bend turn right into the new estate ‘Den of Pitfodels’.  Head along Garthdee Farm Gardens road and at the back, diagonally opposite the entrance, there is a path through to Deeside Way. Turn left (west) and return to Cults Station and back up to Cults Hotel.