One can join the walk at any convenient location.  To reach the Cairn from the North Deeside Road, head up Quarry Road, past Cults Parish Church, turn left into Manse Road and then second right into Cairn Crescent. The Cairn, or rather the remains of it, consists of a large mass of stones and boulders and measures 24 metres in diameter and is 4 metres high. It was probably built during the Bronze Age, dating to the early 2nd millennium BC.

Head north-west and cross the road (Cairnlee Avenue East) into narrow passage and you emerge at Earlswell Place. Continue to a grassy area opposite. After a few yards you reach turn Earlswells Walk and follow it out of the cul-de-sac to Earlswell Road where you turn right. Just before reaching Earlswells Drive on the right there is a short passage way on the left (between houses 22 and 20) to Cairnlee Road.

Turn left (west) and when you meet a green area do not take the first path but the second, immediately past a wooden fence.  After a few yards leave the path, bearing left, to join another path which goes between two houses, leading to Earlspark Road. Cross it and head up Earlspark Drive until you another road but still called Earlspark Drive, turn left and then almost immediately right into a passageway. This is the start of a long drive which goes all the way up to Earlswells House; however, when you reach an open green space turn immediately left into Earlspark Gardens. Follow this, keeping left at the next junction, till you meet Baillieswells Road. Turn left, cross with care, and take the first right into Springdale Road. One alternative route to the western green area is then to turn into Springdale Park and a narrow passage between houses at the end  but this leads to a steep grassy bank which you have to descend. An easier route is to carry on along Springdale road for a few more yards, just past where Springdale Crescent starts on the left, and take the path across the green space.   Go through a passage way to the right of number 6 Springdale Crescent.

You then will have reached a large green area lying on a roughly north-south axis with electricity pylons along it.  You can explore to the left but the south end is a dead-end. Head north and at the north end the path bears right behind house. Where it curves right to join Pinecrest Drive, take a path carrying straight on till you reach Bailleswells Road again. Walk downhill along the grassy verge (note the March Boundary Stone No 15 – see note one) and cross the road, again with care, into Pinecrest Circle.

After the third house on the right there is a passageway which leads to a mown grass area; leave the path and head diagonally left to the far corner where there is a gap in the wall at the edge of woodland.  In the wood head in a north-easterly direction amongst.  There are a number of rough paths and various cycle jumps in this section. At a corner of the green fence (notice the boundary stone) head north and uphill. The path follows along the fence.  When a gate in the fence is reached (in rough line with Dalhebity House), turn right and shortly one reaches a well-made path with signpost. If you want a longer walk you can join either walk 4 or 6 here. Turn right and when you reach the edge of the Hillview Church car park, leave the path and cross the car park in a southerly direction and head down the edge of the houses and the playing field. About halfway down there is a wide green area and footpath to the right, enter and cut diagonally (south-westerly) across the grass to join the Earlspark Avenue. At the junction with Earlspark Road turn right and almost immediately into passage way (beside number 11). Take this path and when Cairnlee Road is reached turn left and then after short distance (by house number 6) take the passage way on the right into Earlswells Road. Turn left and then right into Earlswells Drive. After a couple house take the short cul-de-sac road to the left which leads to a path, on the left of the house at the end, onto a grassy space. Bear right and this leads to Cairnlee Avenue East. Cross over and enter (by the ‘Twenty Plenty’ sign) an L shaped grass, walk to the south end, cross the road (Cairnside) and aim for the south westerly corner where there is a row of garages. Walk between the garages and you arrive at the Cairn. 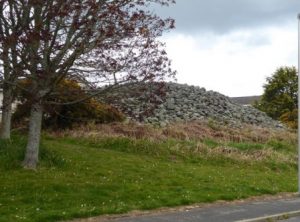 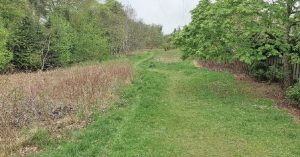 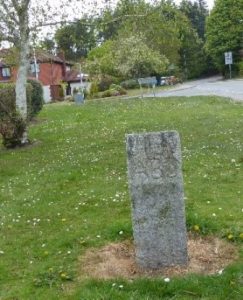 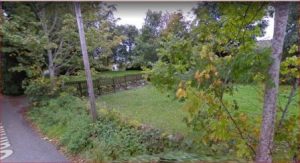 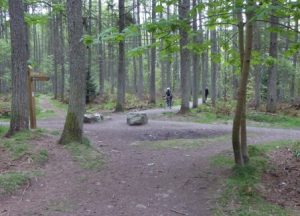