From the carpark cross over the road, with care, and go along path with trees to your right.  In the distance one can see the Hill of Fare.  At the corner of the wood the path turns right and goes through a gap in a broken-down wall and some gorse. Keep a look-out for a path bearing off to the right a few yards further on which goes up a mild slope, turns westwards through gorse and descends downhill, with the original path joining from the left. After a gap in a wall, take a right turn and follow along the west boundary of the field which adjoins the Local Nature Conservation Site. 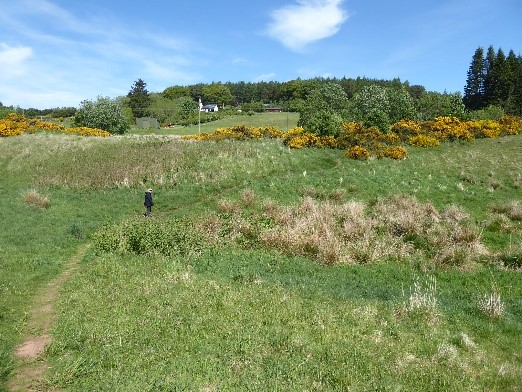 The path then heads back towards the centre and after passing under electricity wires turn right before the second set of wires. This heads down towards a small burn. Cross over and after a few yards take right fork just before a mature ash tree (Ash 1) and then turn right a few yards further on. The path then heads back towards the Local Nature Conservation Site and then turns in a southerly direction. Ignore path coming in from the left (you will take that path on you return). 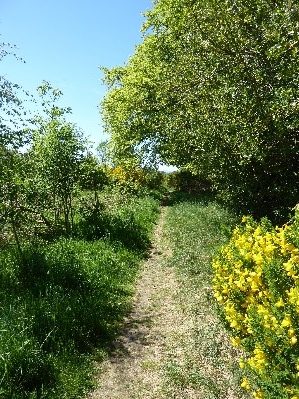 You then cross a gap in another wall and almost immediately turn right; the path goes into a loop towards the west and back up to higher ground.  There are views at different places of Kerloch, Clacknaben, Mt. Battock and beyond. Ignore a path to the left and when you reach a further mature single ash tree (Ash 2) go left and follow path till you reach the outward path just before the wall mentioned earlier. 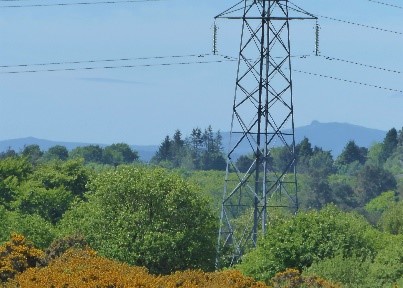 Follow the path till the turning on the right mentioned earlier and head north-easterly direction over the top of this shallow hill and down the other side. Take the first left and re-join your outward path at the first ash tree (Ash 1). Cross the stream and turn immediately right.

The path heads roughly north-west along the centre of the field and eventually re-joins the outward path. After the wall and up the shallow slope, take the right fork and this leads you back to the car park.